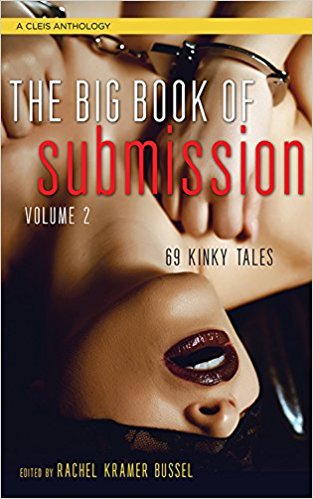 Yes! I’m delighted to announce that I have a story in The Big Book Of Submission Volume 2: 69 Kinky Tales! in fact, I can hardly describe how good it feels to be included in the company of some of the most talented erotica writers in the genre.

When my copy of the book arrived in the mail,  I tore open the envelope and scrolled my way down the table of contents — it read like a veritable Who’s Who of prominent names. If you ask me, Rachel Kramer Bussel has worked her editorial magic once again and has done Cleis Press proud. This anthology contains an broad range of kinky stories  of submission  — literally short — since each tale in this collection tops out at  1200 words.

And did I mention that my story, Plug Play is among them? I think I did, and now let me offer my readers a sexy snippet from my story — not too many words, mind you, since it’s very short — but perhaps just enough to whet your appetite and make you want to purchase the book to read the rest of my story — and all of the others

“Please, Richard, tell me you’re not serious,” I say, when he shows me the plug he has in mind. “That thing is enormous. It’s not going to fit in my ass.”

“Really, Kira,” he asks with that crooked grin of his, “that remains to be seen, doesn’t it? Kneel on the edge of the bed, face down and ass up.”

Richard, an ass man from way back, has been training mine since I became his sex slave six months ago — moving gradually from the finger-sized plug he started with, to the big bruiser he’s selected for today. We both know I’m Okay with it — we have safewords  for serious objections and I’m not saying them. Richard, looking amused, arches his brow and waits for me to comply. I huff with indignation, but I do.

“That’s it. Higher even. Legs farther apart. Good girl,” he croons, stroking my asscheeks, spreading them wide, exposing me completely.

To read the rest of this story and all the others, you’ll need to purchase the book. I feel confident you’ll find the investment well worth your while. 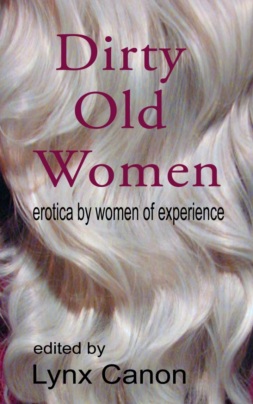 It is my great pleasure to announce my inclusion in a new anthology, aptly titled, Dirty Old Women — an intriguing collection of erotica by women of experience, edited by Lynx Canon

Dirty Old Women know  what they want  and are not afraid to say so.

I hope to see you there!

Are there any tender or painful, body parts I should be aware of?” Don inquired before beginning the massage.

I lay naked, face down on her padded massage table covered by a light blanket.  I sighed. “That’s pretty much any body part you can name after six weeks in this cast.”

“Why you poor woman,” she said, in a low, husky voice, “You are in need of attention, aren’t you? Let’s see if I can make you feel better.”

Don poured a small circle of heated massage oil into her hands and rubbed her palms together, releasing a soothing, spicy smell into the air. She began with basic Swedish massage, combined with acupressure; first working on my tension filled upper arms and shoulders, then moving down my spine to my achy lower back, and to my hips.

I felt the first small twinges of arousal between my legs when Don’s hands, slick with oil, slid over the smooth round cheeks of my ass, stroking, kneading and spreading them apart. The sensations became so exciting I squirmed with pleasure, surprising myself, because I wasn’t into women at all. But Don was tall, broad-shouldered, and somehow manly, particularly in the dim light of the room—and into women or not, this massage was turning me on.

Don continued to massage my hips—and I imagined, what if those talented hands were to slide between my legs, parting the swollen outer lips of my opening, and delve into the moist tingling flesh within. I waited, barely breathing, barely breathing, but then she moved on to the backs of my thighs and knees to my lower legs, and spent some time doing acupressure on my feet.

Calm down, Mia, I told myself, what are you expecting anyway—a full body massage?

“Mia, you can turn over now,” she said softly. Struggling with the cast I rolled myself over and with the blanket covering me, I  lay back comfortably with a small pillow beneath my neck. Using her fingertips, Don massaged my head, face, and throat, even my ears, and the muscles in my arms and hands.

“You’re really tense. You need to remember to breath,” she said, firmly, continuing on to stroke my neck, and shoulders, and upper chest.

I was breathing alright, half gasping in fact, with my nipples jutting out at attention, breasts aching with excitement, and the muscles of my pussy clenching and squeezing down hard. Never mind becoming less sexual during menopause—by the time Don reached my lower belly, I was ready, more than ready for anything she wanted to do. But she folded the blanket back over me and her hands moved onto my thighs instead, and continued downward to my knees, lower legs, and feet—and then slowly, deliberately, back up again.

She paused, when her hands reached the tops of my thighs, with her fingertips almost but not quite brushing my pubic curls hidden beneath the blanket. A hot rush of excitement traveled like an electric current straight to my clit. I gasped with pleasure and opened my eyes.

Don gazed down at me longingly. “Beautiful Mia,” she murmured, and waited, her dark eyes questioning. Speechless with excitement, I smiled up at her and nodded my agreement. Full body massage, oh my god, yes! Please don’t stop now! I thought, and a ripple of pleasure went through my entire body when she set the blanket aside and reached for me.

It was a time when female sexual gratification was viewed as a birthright — and casual sex with perfect strangers was as easy as shaking hands.

If it felt good we did it. If it felt really good, then, by god, we did it again!

Still, by the end of the 70s, having accrued enough sexual experience to eroticize a small, sex-starved country, I’d taken a giant step back from my promiscuous lifestyle. But not because I felt I had an out-of-control addiction requiring a twelve-step program for recovery. Or fear of disease either — believing as I did that God protects both fools and innocent, and I fit somewhere into one or both of those categories.

And in the end, I realized I wanted and needed a greater level of intimacy than that.